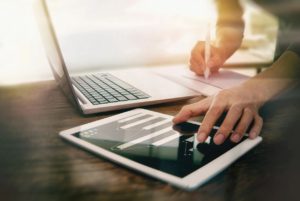 We currently live in unprecedented times due to the COVID-19 pandemic which has had a paramount effect on many industries, including the legal industry. The legal industry can expect to see a greater reliance on technology and shifting court procedures.

When I first started working in the legal industry, I was surprised that technology was not more incorporated into everyday tasks. The swearing of legal documents always had to be in-person affairs, which was often problematic for clients who lived farther from the office.

Clients would have to take long journeys and book the day off work just to sign a document. The courts previously did acknowledge email by service without consent from opposing counsel, which resulted in process servers to deliver physical copies or the use of fax. The need for hard copies of materials for both counsel and the court often resulted in multiple copies of 3,000-page documents being printed which at times could cost up to $8,000.

COVID-19 has forced the legal industry to rapidly implement technological services and software; which include swearing Affidavits via zoom; and signing documents through docu-sign. Much of these services require zero commute and little to no costs. Firms have stopped printing hard copies of documents and have moved towards paperless and cloud storage.

Courts, which previously would require in person hearings, have now moved to virtual or teleconference to debate motions. Although the effectiveness of in-person and teleconference hearings is debatable, it undoubtedly offers the court fast and effective ways to deal with motions. It also allows motions to be conducted from anywhere in the world. We now live in a globalized economy, with often people residing in multiple countries and travelling often. To be able to access courts effectively and easily from a remote location would widen access to justice.

Courts have also accepted service via email instead of the traditional hard copy format or service via fax. Furthermore, we are no longer dependent on physical offices. I have seen some firms give up their commercial lease and move to a permanent ‘work from home’ structure.

However, you are probably wondering by now, what all these changes mean for you as either a lawyer or law student. I believe that many of these changes are here to stay. As a 21st century lawyer, it is integral to brush up on your technological and software skills which can include applications such as Docu-sign, Adobe DC, Cosmolex, PC Law, Slack and cloud-based software. Be comfortable with speaking in video conferencing. All these skills will be great assets to law firms. COVID-19 has accelerated the technological reformation of the legal industry. In the future we can expect the implementation of artificial intelligence. Whereas, specialized knowledge and skills will be assets that will not be easily replaced by technology.